An impressive turnout at the National Schools Regatta

The recent change in rules this year has seen many of the traditional ‘First VIII’ schools move to other events, leaving a smaller but very competitive category of Championship and Non-Championship VIIIs. The crew has always shown great commitment in their racing, and the time trial, in slightly windy conditions, was no exception. They came off the water 8th in their category. Due to the cross headwind conditions of the day, which saw the faster crews placed in the faster lanes, it was always going to be difficult to overhaul this position in the side-by-side racing. Their time trial meant that they competed in the C Final of the Championship VIIIs. This was a great race with them leaving behind Canford and Oratory, and then involved in a tight race with Gloucester, Dulwich and Bedford Modern. After pressurising these crews through the middle section, they were unable to keep their bows in front over the line, and maintained their eighth in category finish, a respectable result amongst tough opposition. – Mr R G Edmondson

For one reason or another the 2nd VIII have had a disrupted season this year. Because of this, their focus going into the National Schools Regatta was to take part, have a great time, support their team mates and enjoy their training. To this aim they were successful. There is so much more to rowing than just making the boat move fast, and each member of the team took a great deal from their commitment to the cause over the summer term. Some of the group will have prepared well for competing for a position in the 1st VIII next year, while others got on with enjoying the here and now. Their competition at National Schools was exceptionally strong, with only the second boats from the top ranking schools to compete against. The boys gave it their all but were ultimately out-powered by the depth in talent from the other schools. However, they showed great spirit and to see them all shaking hands, talking and sharing a laugh with the Shiplake 2nd VIII at the end of a long Saturday was a great sight. – Rev J Stephenson

National Schools was the girls’ first experience of national racing, and it was great to see them getting stuck into such a competitive event, especially as three of them have only rowed for a matter of months and this was their second experience in a racing scenario. The girls reached the C final where they put up a good fight against the other crews. They now have an understanding of the level they need to aspire to, to be at the top end of this event, and it’s great to see them keen for the year ahead. – Ms C Willis

The crew were competing in J16 Championship VIIIs after the dissolution of the lower J16 1st VIIIs category. This put them up against crews from St Pauls, Abingdon, Westminster and Eton, amongst others. After a tough race at Wallingford Regatta, they needed to increase their speed if they wanted to make the top 12. Their time trial went well and they improved significantly and put in a much better performance than at Wallingford. However, the margin was incredibly tight and they were 15th and in the C Final by a couple of seconds, over a 5’50” race. In the C final they came a close 3rd with Bryanston School and Pangbourne College. Based on previous years, this is a step up in performance at a tricky time of the year when the boys are balancing revision, exams and training. – Mr. A J Stuart

The last weekend of May saw the largest contingent of Year 10 rowers in memory, racing at the National Schools Regatta. Spirits were deservedly high as two quads boated on Friday, with the first boat placing third in the opening time trial out of a huge 61 crews. A brutally close semi-final followed, with our boys just getting edged out of the A Final, to come eighth overall. Saturday saw three J15 VIIIs push off for the start line, but no doubt exhausted from the day before, the 1st and 3rd VIIIs were knocked out early, leaving the 2nd VIII carrying the torch by breaking into the semi-finals. A set of tough races followed where the 2nd VIII pummelled a number of the big public schools to come 9th overall. Well done to all for their hard work. – Mr J Tabor

The main focus of this term’s rowing for Year 9 was the National Schools Regatta, and a total of 27 boys were entered as three octuple sculls, showing excellent strength in depth and promise for the future. The A octuple, coxed by Tom, performed well in the time trial, coming 14th out of the 26 entries in a very strong field. This meant they progressed on to the C final where they came 4th, beating Cheltenham College and the renowned Westminster School. The B octuple, coxed by Alex, made it into the D final of their event and so were able to gain some valuable six-lane racing experience. The C octuple, comprising mostly boys who have only been rowing for a few weeks, enjoyed a run out in the time trial but unfortunately did not make it to a side-by-side race. Overall, the day was a great success, with valuable racing experience gained and a real taste of what is to come over the next few years. – Mr R E Mellows 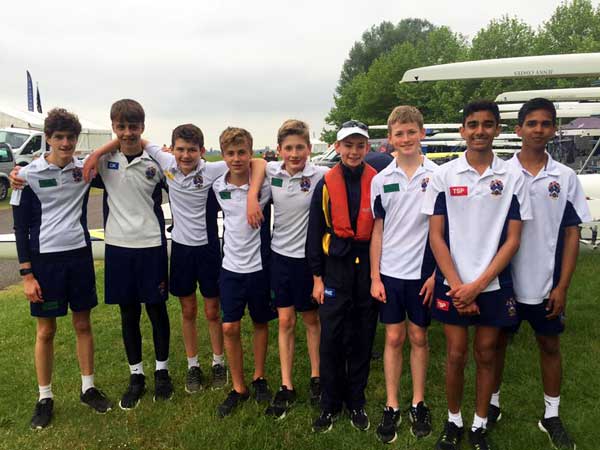 James makes his debut for Middlesex 2nd XI Summer Reading Challenge launched!
Book an open event Apply online Keep exploring
We use cookies to ensure that we give you the best experience on our website. Click on the 'X' to accept our use of cookies, or 'Learn more' for more information. Learn more