Year 11 trombonist Alex Turvey performed recently with the National Youth Jazz Orchestra’s Big Band Academy at the Royal Albert Hall, and another Year 11, Ben Shaw, has sung his way into the National Youth Choir of Great Britain as a Treble. 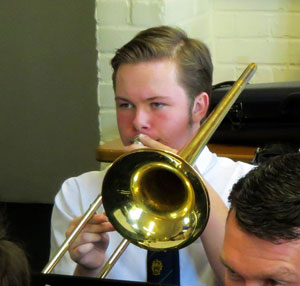 “It was so exciting,” said Alex; “I’d never even been to the Royal Albert Hall before.” The NYJOBBA concert was an afternoon performance in late November, and formed part of an outreach programme for vulnerable elderly in London. Alex has been playing with the NYJO since last term. He travels to London every Saturday to rehearse with the orchestra at the London Centre of Contemporary Music. Alex has been playing the trombone for nine years and, in addition to the NYJO, plays with the Beenham Wind Orchestra, the Earley Music Centre Big Band, and numerous groups at Blue Coat, including the Swing Band, Jazz Band, Brass Band and Concert Band – and he plays keyboards for a budding rock band called High Fire Risk. Alex plans to study music for A Level and hopefully then go on to a music college – preferably the Royal College of Music. This summer, Alex was also part of the Blue Coat group that travelled to Uganda with the charity Brass for Africa, who provide a music education to disadvantaged children. “It was a brilliant experience,” Alex said. “The people were so welcoming and music and art are so much part of the culture. The music tour was emotionally moving because we were playing to people who would never otherwise see a band play.“ 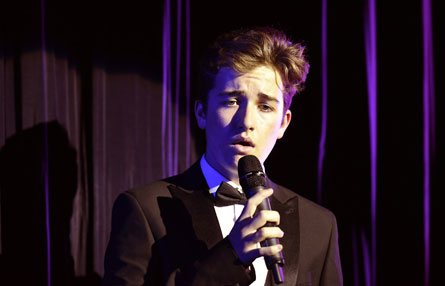 For Ben, the audition process for the NYCGB involved performing a choice of a classical piece or a song from musical theatre, as well as some sight reading: “I sang ‘Stars from ‘Les Misérables’, which I thought went quite well, but the sight reading was not fun at all!” said Ben. Ben says he has been singing “as long as I can remember”. He has been attending classes at the Pauline Quirk Academy in Maidenhead for a number of years, and is currently rehearsing for the role of Coach Bolton in “High School Musical” at the Academy. At Blue Coat, he is currently studying for a GCSE in Music and participates actively in the musical life of the school. Blue Coat’s Director of Music, Jonathan Bowler, said: “Ben is a very fine singer who involves himself as much as possible in music at Blue Coat. He is a tenor in both our Chamber Choir and our School Choir, he has sung solos in our Rock and Pop concerts, he was part of the cast of our production of ‘Les Miserables’ last year and he recently sang the role of Teen Angel in ‘Grease’.” The next step for Ben is to attend a two-week camp with the NYCGB after Christmas – and then another camp in the summer.

U15 rugby boys win County Cup final Blues News Issue 42
Book an open event Apply online Keep exploring
We use cookies to ensure that we give you the best experience on our website. Click on the 'X' to accept our use of cookies, or 'Learn more' for more information. Learn more