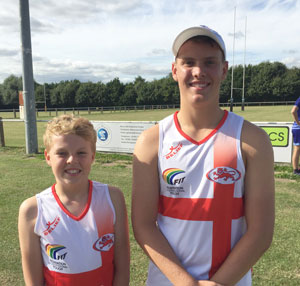 Brothers Sam (Year 13) and Tom (Year 9) Lawton-Davies took part in  the Junior Touch Championships in The Netherlands in August, when they represented England in the  U18s Mixed and U15s Mixed teams respectively, against teams from Wales, Scotland, Ireland, France, Germany, the Middle East, The Netherlands and Guernsey.

This was Tom’s first tournament and he came home with a silver medal – and Sam, who was playing in his second tournament for England, finished with his team in a respectable third place.

Blues News Issue 41 Students relish Project Ghana experience
Book an open event Apply online Keep exploring
We use cookies to ensure that we give you the best experience on our website. Click on the 'X' to accept our use of cookies, or 'Learn more' for more information. Learn more