Reading Blue Coat is now closed to pupils and staff, apart from those who are enabling provision of care for the children of key workers. All other pupils are continuing their education from home. Reception is closed for the Easter break and will re-open at 8am on Monday 20 April 2020. 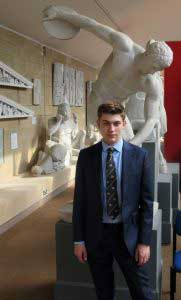 We arrived in Cambridge nicely on time and had time for complimentary tea and biscuits before our first lecture on Homer’s Odyssey.

Was Homer one person? Probably not.

Was the Odyssey a written book as we know it? Probably not to begin with. It would have been spoken and performed first.

Could people from other countries compete at the Olympic Games? No.

Did Greece belong to ‘Europe’. No, it looked towards the empires of the East.

Crucial questions for the AS Classical Civilisation students. Our lecturer didn’t do the obvious and go through the Odyssey stage by stage, but put the story in context for us. It follows straight on from the Mesopotamian classic, Gilgamesh, and you can see the similarity easily in the text. Whereas the Iliad is about macho men and the things they do in war, the Odyssey is about the ‘human’ side. Both books together were more of reference book on how Ancient Greeks should lead their lives rather than straight story telling. Odysseus gets blown seriously off course – physically and metaphorically – but his one goal in life is to return to his wife and son in Ithaca. There is even a cave in Ithaca where the people of the island used to worship Odysseus.

In the afternoon, the group split up into separate sessions: Mr Roy was able to meet the new director of the Cambridge Latin course (also one of the producers of the OCR Classical Civilisation syllabus) and the students went off to lectures on Greek Art, the Imperial Image and the Fall of the Republic.

Excellent response to Blue Coat’s first Book Bingo Blues News Issue 44
Book an open event Apply online Keep exploring
We use cookies to ensure that we give you the best experience on our website. Click on the 'X' to accept our use of cookies, or 'Learn more' for more information. Learn more