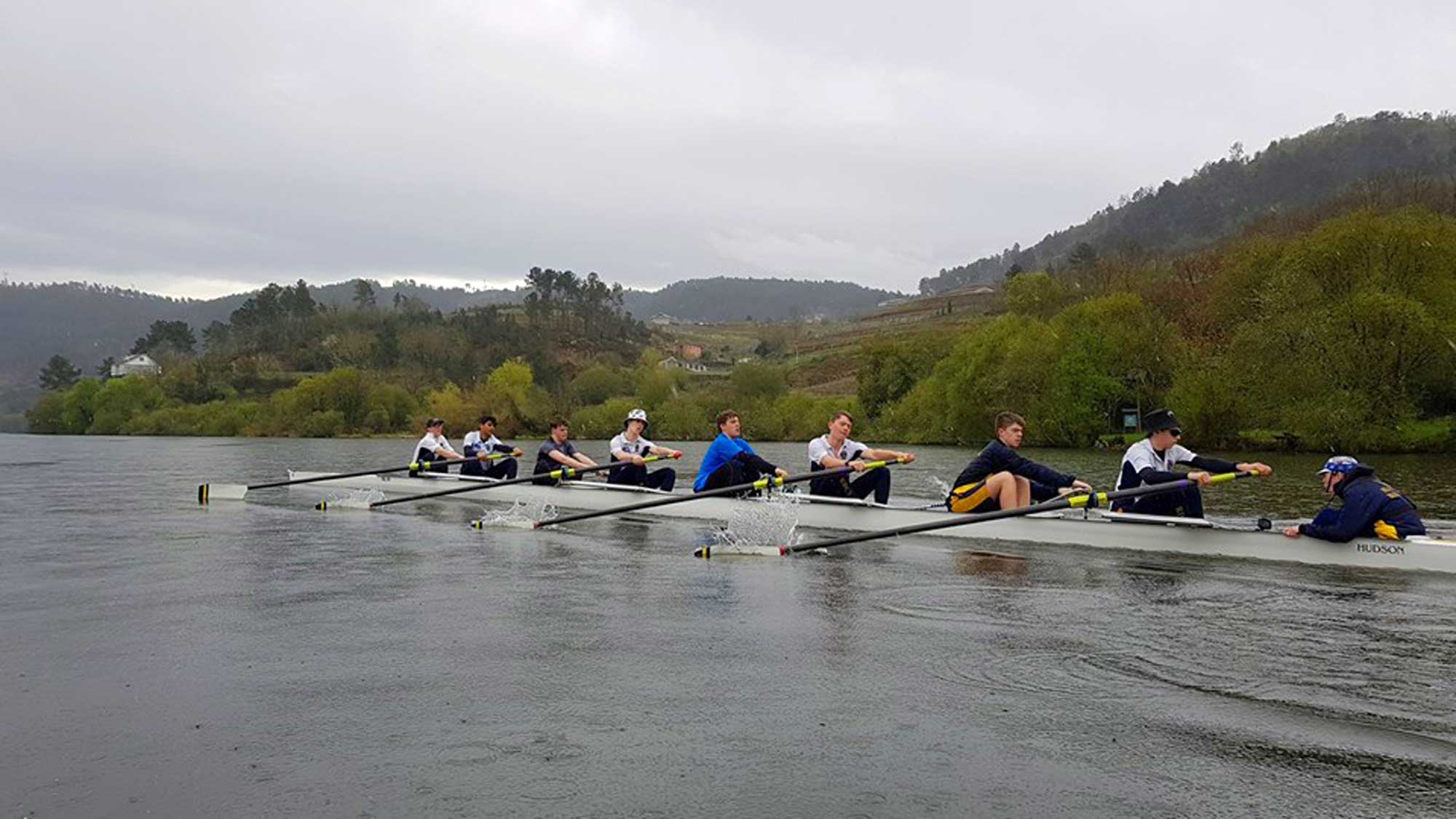 On the morning of Easter Sunday, 45 members of the Boat Club and three coaches flew to Porto before a two-hour transfer to a training camp location near Ourense in north west Spain, where we met up with a further two coaches and a large trailer load of our boats and equipment that had made it over in preparation for the week’s training. This 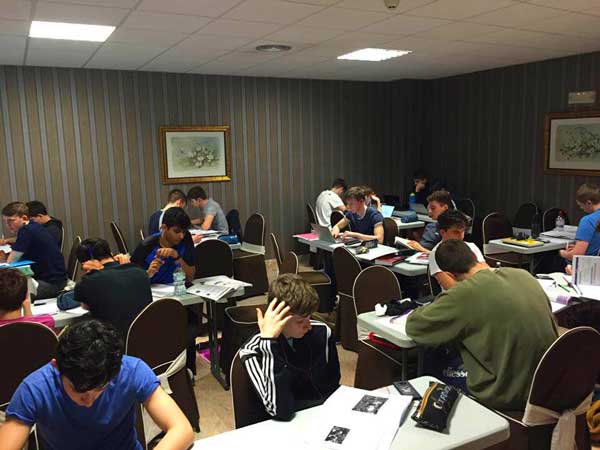 was a new location for the Boat Club’s annual training camp with a very comfortable spa hotel located on the banks of the River Mino. After checking in, the boys managed a quick training session before sampling the all-you-can-eat hot buffet, which proved to be very popular throughout the week! Following this the older boys settled down to the first of many revision sessions throughout the week. 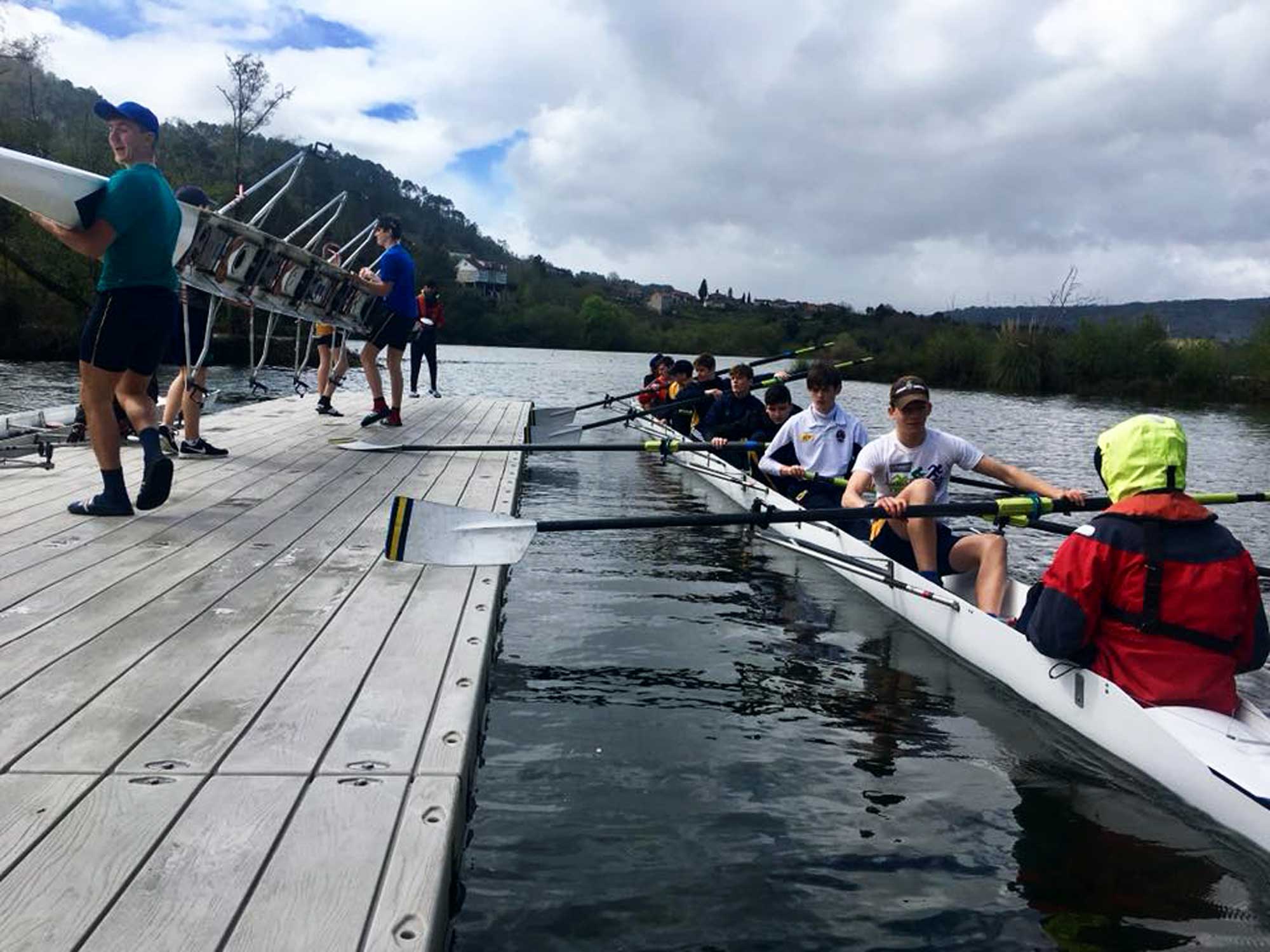 A day of camp usually started with some hill sprints before breakfast, followed by a combination of rowing and revision alternately throughout the day. We were sharing the hotel with some older clientele who were enjoying the spa – and the rather intimidating Belarusian Rowing Squad, including the rowing legend Ekaterina Karsten, who is training for Tokyo 2020, which will be her 8th Olympics,

having won medals at four previous Olympics! Communication was limited to Mr Tabor’s rudimentary Russian and Year 11s Dan and Ethan inadvertently getting in her way on the water and receiving some reasonably pointed advice in Belarusian!

The weather was often overcast with the occasional shower, although relatively warm, but we did experience a few sunny days with water like glass. All the squads had the opportunity to do some great training and racing during the week, and they were all well behaved and mostly on time (apart from a group of Year 10s on the final day for the 05:40 transfer to Porto airport; this was rectified after a quick room search!). Particular thanks to Mr Stuart and Old Blue Fraser Jarrett who drove the equipment there and back, in addition to coaching all week. Also to Mr Tabor and Miss Willis, who coached and kept the Year 10 squad busy all week! – Mr Edmondson, Head of Rowing

UCAS Conference 2018 Biennial Inspection success!
Book an open event Apply online Keep exploring
We use cookies to ensure that we give you the best experience on our website. Click on the 'X' to accept our use of cookies, or 'Learn more' for more information. Learn more