On Saturday, 16th September, Year 12 student Harry Plested was invited to be a last-minute replacement in a drone racing team taking part in a five-team competition in Ireland for an international television series. The team was made up of a Korean, an American and Harry – who was replacing an injured third member of the team. The television series will be broadcast in November.

Harry normally races with the Final Rush team (http://finalrush.co.uk/#) – made up of five team members from all over the UK. He has competed in national and international competitions since he first started racing 18 months ago; he came 11th at last year’s UK Nationals, and he reached the finals of the Danish Nationals over the summer. He is currently 4th in the UK League, IFPV (Inside First Person View).

Harry also builds and maintains drones for a team called NexxBlades. He flies every Sunday for 5-6 hours and spends about 10 hours a week building drones. Harry has to work hard to balance school life with drone life, but he is managing to incorporate his passion for drones into his A Level Design Technology project. He hopes to study aerospace engineering at university in the future. 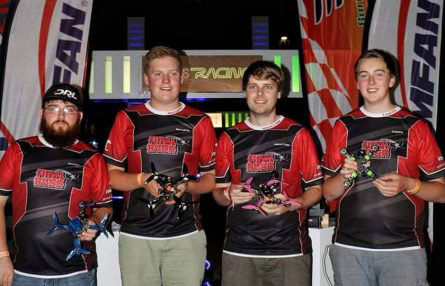 Boat Club raises thousands of pounds with sponsored row Excellent response to Blue Coat’s first Book Bingo
Book an open event Apply online Keep exploring
We use cookies to ensure that we give you the best experience on our website. Click on the 'X' to accept our use of cookies, or 'Learn more' for more information. Learn more