American historians suggest that the first ‘Thanksgiving Day’ was declared at some point in the 1600s in Massachusetts. To be precise, historian James Baker states in his book, Thanksgiving: the Biography of the American Holiday, that the three day event in Plymouth in the fall of 1621 was the historic birthplace of the American holiday.

Of course, like many American traditions, one could argue that it has English roots. (As a side note: American football evolved from rugby – the famous American sport that is an international phenomenon started at an English boarding school where a boy picked up a football… but that’s another story.)

Thanksgiving is essentially the American version of the English harvest festival. Indeed, many historians think that the first Thanksgiving celebrations in America took place around September or October, not at the end of November. These earlier months are more appropriate months in which to celebrate the harvest.

However, the English or Christian tradition of the harvest festival, in turn, can be traced even further back with roots in the Old Testament. Jewish people were celebrating the harvest for centuries before Jesus was even born, as is evidenced in the book of Deuteronomy. Judaism calls their celebration the Festival of Tabernacles, during which followers were instructed to ‘celebrate for seven days after you have gathered the produce of your threshing floor and your wine-press… Be joyful in your festivals, invite sons and daughters, foreigners, servants, fatherless and widows in your towns’. Modern versions of Thanksgiving often include inviting friends or neighbours who do not have elsewhere to go; this practice could even be linked back to this Old Testament tradition.

So it is rather easy to trace the modern celebration of American Thanksgiving all the way back to England, and then to Judeo-Christian roots. The early versions of Thanksgiving in America certainly involved English Pilgrims, settling what eventually became known as the ‘Thirteen British Colonies’.

So the tradition of giving thanks has a long history, both in Judeo-Christian traditions, and indeed an annual harvest festival is still part of the Church of England. It also has a long history amongst Native Americans. And in 1621, in Plymouth, Masscahusetts, English Pilgrims came together with Wompanoag Native Americans. They followed the pattern of both of their ancestors in having a religious service followed by feasting.

It’s Thanksgiving and this is our spiritual assembly, and I’m grateful that Rev’d Toogood is allowing me to use this weekly slot as a religious service celebrating my favourite holiday. My family feast will take place later this weekend in the Headmaster’s House. We will sit around the table – we will have 13 present this year – and give thanks. I do actually arrange for us all to take turns around the table and say what we are thankful for. It is an important family tradition. Now we don’t quite have time for everyone around the hall this morning to give thanks, but I would love to hear from you later today. Do stop me and tell me what you’re thankful for. 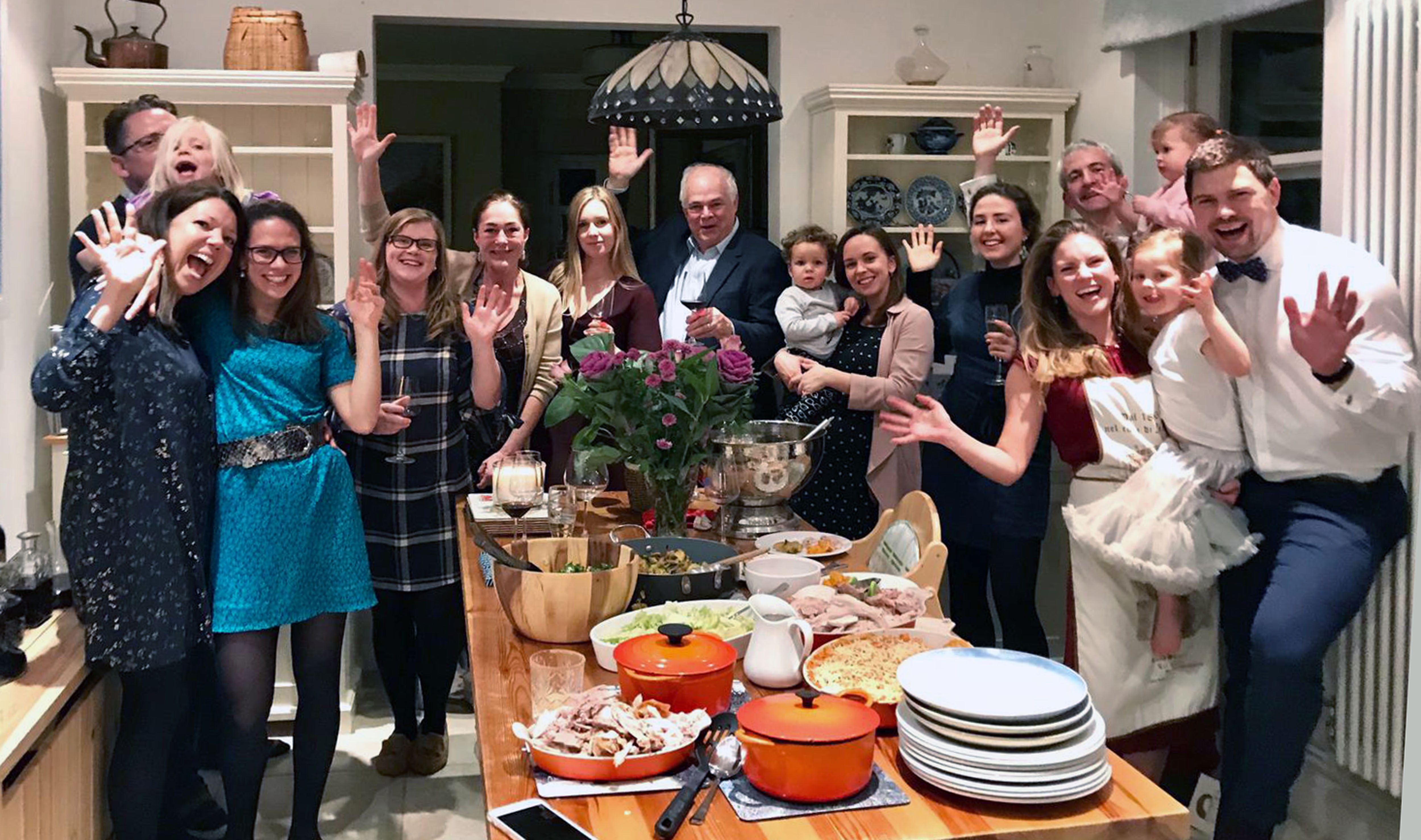 Thanksgiving at the Headmaster’s House, Nov 2018.

I’m going to say something controversial now, but I’ve said it before: I prefer Thanksgiving to Christmas. To me, Thanksgiving is about food and family. Christmas is bogged down in materialism and commercial aspects, including excessive and often stressful shopping. What should I buy for my sisters? What do they like? What is their size? Oh I’m stressed already, and we haven’t even gotten on to gifts for my parents or wife or daughters or godsons or niece or nephews.

Thanksgiving is a much cleaner holiday – it celebrates family and sitting down for a good meal, but the focus is on being thankful for the past year. It is a meal that looks back with gratitude, and looks forward with hope. What’s not to love?

From the perspective of anthropology, I believe that certain traditions and ceremonies survive because they are deeply human, and connect us to each other in profound emotional, spiritual or transcendent ways. I don’t think it is a coincidence that in Judaism, Christianity and separately in Native American traditions, ceremonies around harvest festivals evolved. There is something uniquely powerful about being thankful. It is not unrelated to what Mr Thomas said last week, about being in the moment, and appreciating the moment.

It is no surprise to me that modern research shows that the traditional act of giving thanks is actually good for mental health. Rev’d Toogood mentioned this in her assembly on Monday: there is now an app, ‘Gratitude Garden’.  Her gratitude wall is going well in the chaplaincy – today would be a fitting day for you to write on that wall!

Research shows that taking a few moments to be grateful or thankful each day actually improves your mental health. I spoke about this in an assembly last year, where I highlighted the benefits of saying thank you and remembering good things that happen in your life. When something good happens, and you remember it or thank some else, you actually get more out of it because you celebrate and remember the moment again. Good things in life give you pleasure by releasing dopamine in your brain – when you thank others or remember these, you chemically experience the joy of good moments again.

Jewish, Christian and Native American traditions have known this implicitly for years – and had festivals around giving thanks. Now that we have this significant scientific research behind it, Thanksgiving is more powerful and profound to me than ever before. I always knew it was special; now I understand why it is special from a psychological and mental health point of view.

I am immensely grateful that I am part of the community of this school, and I’m proud of what you have all achieved thus far this term, and hopeful about you will go on to achieve through the remainder of this year. I’m thankful for the committed staff, who go above and beyond, and so many do so every day. I’m grateful that as a community we are kind, respectful, and support each other. I’m grateful to have this opportunity this morning to speak to all of you on my favourite holiday of the year.

I’m also thankful that tomorrow we have an open day holiday. Whatever you do this weekend, take a moment to be grateful for what you have in your life, and do not hesitate from thanking someone else who has contributed to your happiness.

In the immortal words of Nicole Westbrook in her smash it, ‘It’s Thanksgiving’:

I close by wishing you all a very Happy Thanksgiving – enjoy this profound festival day, and do take a moment to be grateful and thankful.

It’s okay not to be okay Next Post
Book an open event Apply online Keep exploring
We use cookies to ensure that we give you the best experience on our website. Click on the 'X' to accept our use of cookies, or 'Learn more' for more information. Learn more