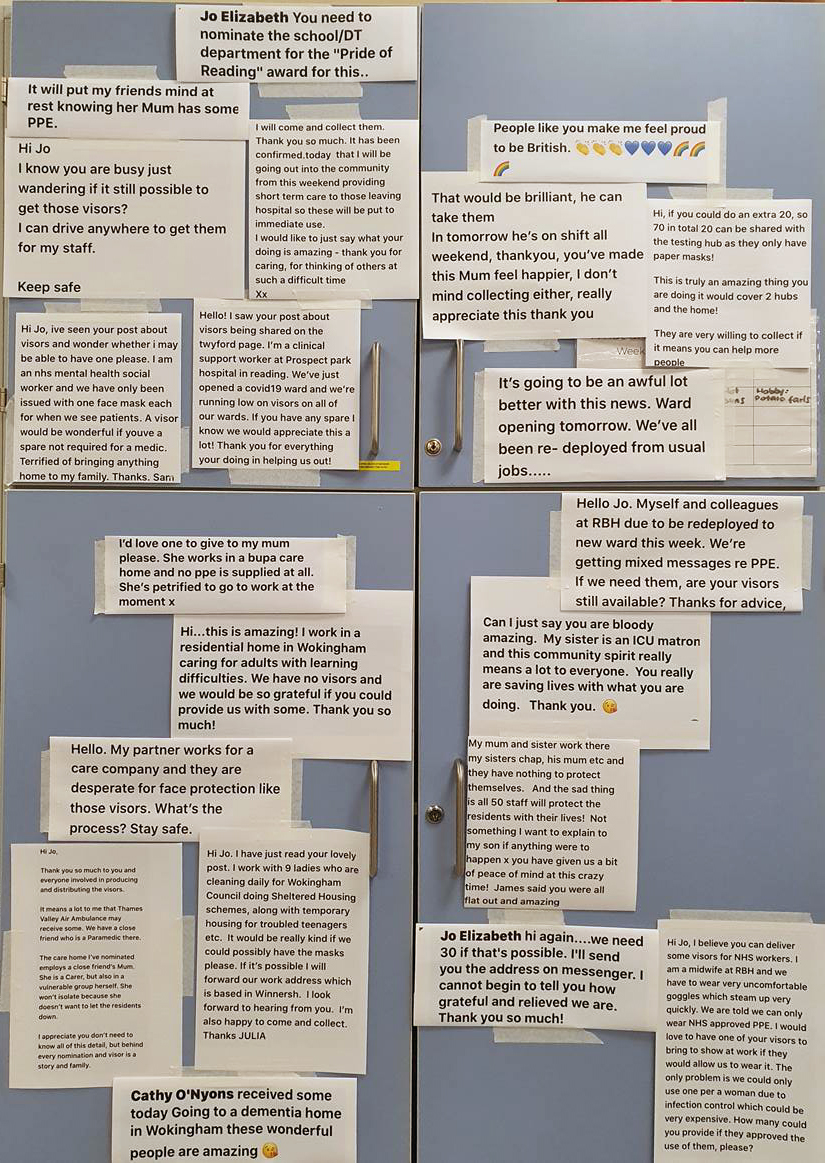 Wednesday 8 April saw the first 500 facial visors being delivered to the Royal Berkshire Hospital where they will be used to defend front line NHS staff working to tackle the COVID-19 outbreak.

The visors are being built by teachers and volunteers at Blue Coat and Leighton Park School after a fundraising drive by Leighton Park DT Teacher Mark Smith.

The idea to produce the visors came from Mr Smith at Leighton Park School, who set up a GoFundMe page and has so far raised over £19,000. Mr Smith says he ‘jumped on the bandwagon’ to produce the visors, before enlisting the help of ten local businesses and organisations. Mr Smith then sent a Computer-Aided Design (CAD) file to Blue Coat’s Head of Design Technology Mr Harvey McGough, who set about cutting the straps to fit the visors with wife and colleague Mrs McGough, and son Alex.

Mr McGough said ‘We’ve been responding to phone calls from people from care homes, small hospitals and care facilities who desperately need PPE. The team of volunteers worked all the way through the Easter weekend to meet the demand, and we are so fortunate to have the facilities to be able to do this.

Two of the components are cut and assembled by our teacher-volunteers here at Blue Coat, before those parts are taken to Leighton Park. Once there, the visor is attached to the strap, and they are distributed to meet the orders coming in daily. A real team effort!’

Blue Coat Teachers Mrs Crossland and Mr Gilbertson were among the volunteers assembling parts before the visors were fitted to the straps at Leighton Park School and finally delivered to Royal Berkshire Hospital. Orders then came in from Reading Borough Council and Wokingham Borough Council, which will also be used by front line medical professionals.

Mr Smith’s county-wide production line is now capable of producing 1200 visors a day, and is working to meet the requirements of dozens of large orders coming in daily. So far, over 6000 visors have been produced, with pending orders of over 1500!

This Map shows the production hubs, as well as each of the locations the visors have been delivered to. Please support by donating here.

Parenting in Times of COVID-19 with Olga Zilberberg Headmaster’s Start of Term Assembly, Tuesday 21 April 2020
Book an open event Apply online Keep exploring
We use cookies to ensure that we give you the best experience on our website. Click on the 'X' to accept our use of cookies, or 'Learn more' for more information. Learn more