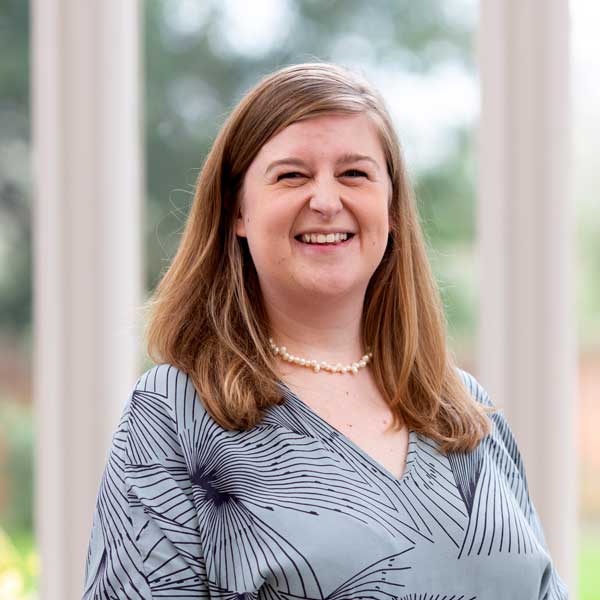 Sarah grew up in the North of Scotland, specifically Gordonstoun School where her father was Headmaster for over 20 years. Sarah also attended the school herself before going to Oxford Brookes University to study Performing Arts with Communication, Media and Culture.

Following university, Sarah worked in several admin roles including an Oxford-based educational business and the John Radcliffe Hospital. In 2016, Sarah went to work in development at St Peter’s College in Oxford with Victoria Fangen-Hall.  Whilst there she gained a wealth of experience in alumni relations and events management, helping to arrange more than 40 events a year for the College.

Sarah moved to RBC in June 2018 in the newly created Development Office as Community Relations Coordinator. Her role includes looking after the Schools’ alumni (Old Blues), and she is very excited by the prospect of meeting many of them at future events.

In her free time, Sarah is a keen theatre maker and is Artistic Director of Thistledown Theatre who create theatre to be performed in “found” spaces rather than theatres, such as the University Church and the History Faculty Garden, both in Oxford. She has performed and directed for many of their shows including playing the title role of Jane Austen’s Emma, Beatrice in Much Ado About Nothing and, most recently, Lady Hester in a new piece of writing called The Lady’s Mad. She also directed Hay Fever and their sold-out production of Bronte by Polly Teale.  Prior to her work with Thistledown Sarah performed at the Edinburgh Festival and toured California.

Mr Philip Gillibrand Dr Guy Williams
Book an open event Apply online Keep exploring
We use cookies to ensure that we give you the best experience on our website. Click on the 'X' to accept our use of cookies, or 'Learn more' for more information. Learn more