Year 11 Charlie has been on the England Badminton training squad since he joined Blue Coat in 2015. In 2016, Charlie was nominated for – and awarded – a prestigious grant from Sports Aid, to help with the cost of his equipment and training. (The list of previous recipients of this award is impressive and includes Sir Chris Hoy, Jessica Ennis-Hill CBE, Tom Daley, Ellie Simmonds OBE and Dame Sarah Storey.) 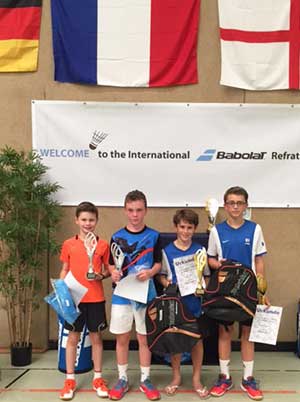 In August 2016, Charlie reached the semi finals in both Singles and Mixed Doubles, and the final in the boys’ Doubles, at the Refrath Cup in Cologne, defeating players from France, Germany, Belgium and The Netherlands on the way. A week later, Charlie won a silver and two bronze medals at the U13 National Badminton Championships, and a couple of weeks after that, he played for the England U13 team at the Swedish Youth International competition, where England came second in the team competition, losing only in the final golden set as the final was tied. In the individual competition, Charlie lost in the second round to the eventual winner.

In November that year, Charlie’s year got even better when, at the Danish Cup in October, playing again in the England U13 team, he made it to the Singles semi finals, where he lost in a hard-fought battle to the top French boy. He also made it through to the quarterfinals in both the Mixed and Level Doubles. The English team played well, beating a team from Finland and some strong Danish teams, to finish 5th (out of 10 teams) overall. The players were exhausted after intense competition, but returned home proud of the best results to date by an English squad at U13 level at the Danish Cup.

2018 was a brilliant year for Charlie; winning both the U15 Bulgarian Badminton Championships and the Dorset U16 Championships.

Andy Wroe – 2017 Old Blue Bharath – Year 9
Book an open event Apply online Keep exploring
We use cookies to ensure that we give you the best experience on our website. Click on the 'X' to accept our use of cookies, or 'Learn more' for more information. Learn more