The Power of Praise

In recent weeks, a number of pupils have been to my study for very good reasons:  I have been handing out a number of Bronze and Silver Awards to pupils in the Lower School and Middle School who have amassed enough plus points. In the past fortnight, I have had some pupils earn Gold awards for 50 plus points. When a pupil comes to the Headmaster’s Study to collect a Gold award, we write their name in a leather bound book, which has been handed down to me from previous Headmasters. I then express my delight at their achievement by doing a headstand for them, before I shake their hand and send them on their way.

Doing a headstand might seem like quite a novel way for a Headmaster to celebrate a pupil’s achievements, but it is not an original idea. I got the idea from my own father. When I was in school, if I ever brought home a very good end of term report or achieved something really special, my father would celebrate by doing a headstand. I have quite vivid memories of my father hooting and shouting with delight when he was proud of me, and then standing on his head.

The last time I remember my father doing a headstand was my second year at university. I was rowing in an eight-man crew in the national championships, we crossed the finish line, and whilst we did some celebrating in the boat, we then heard some commotion over on the bank of the river amongst the spectators, and there was my father, doing a headstand in front of hundreds of spectators. It was his own personal way of telling me that he was proud of me. My teammates thought it was wild, and they loved it.

I was thinking of headstands this weekend as I was reading some educational research about the importance of praise. I know that some of you probably think that reading research sounds like the boring type of thing that a Headmaster does in his free time. But hopefully it is also slightly reassuring; I mean, you would probably be disappointed if I were hanging out in the Purple Turtle on a Saturday night! 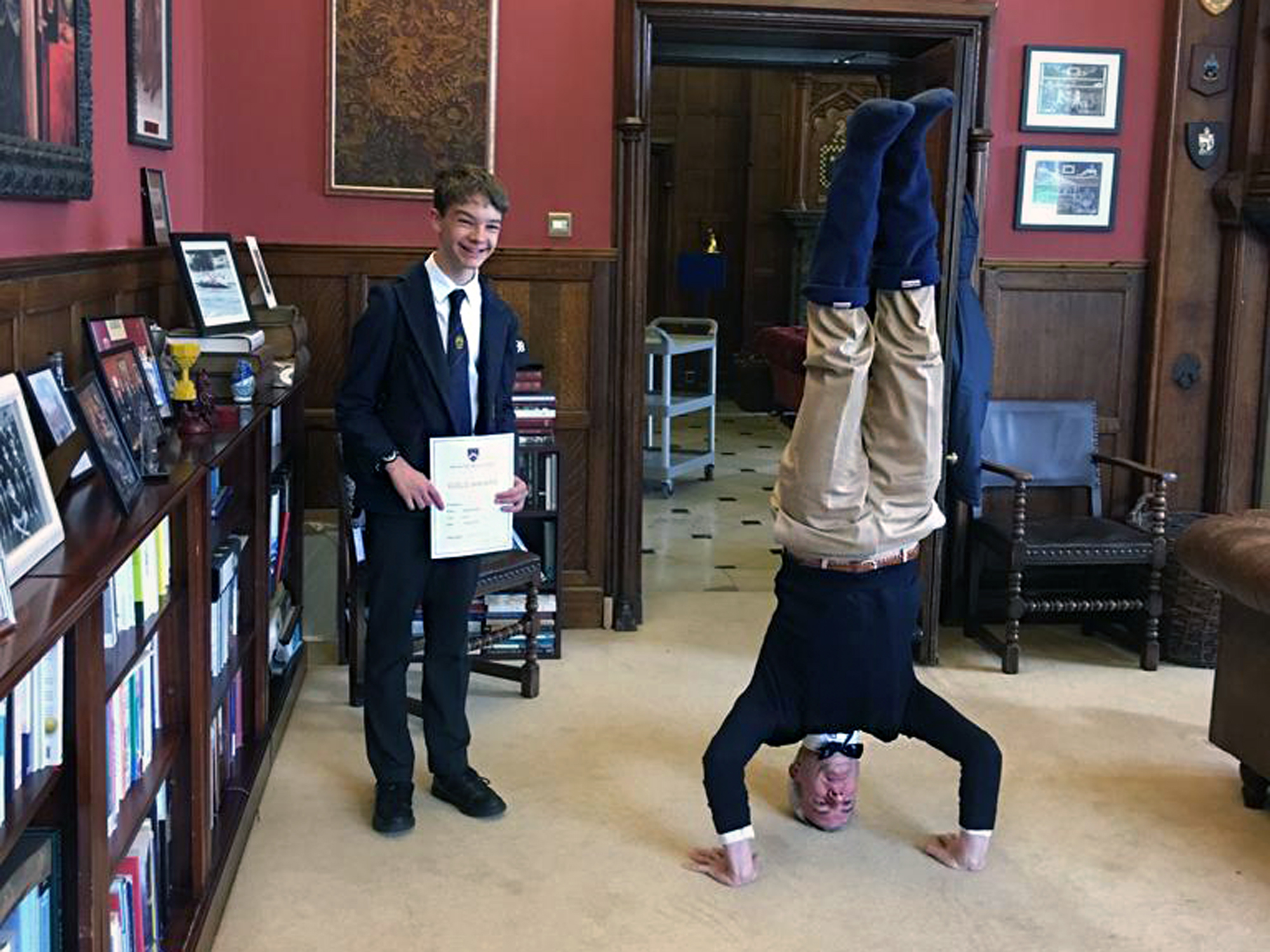 Anyway, the article that I read this weekend was published in Educational Psychology and explains a study that says teachers should praise more and punish less. The rationale is simple: this study demonstrated that pupils are more likely to focus in class and concentrate on their schoolwork if they are commended, rather than reprimanded. The research was based on thousands of pupils in America, and revealed that students spent about 25% longer paying attention to tasks with the highest praise-to-reprimand (PRR) ratio, compared to those with the lowest PRR ratio.

The lead researcher from Brigham Young University said, ‘praise is a form of teacher feedback, and students need feedback to understand what behaviour is expected of them . . . unfortunately previous research has shown that teachers often tend to reprimand students for problem behaviour as much or more than they praise pupils for appropriate behaviour . . . Everyone values being praised and recognised for their endeavours; it is a huge part of nurturing a young person’s self-esteem and confidence.’

I’m so pleased that our plus point system is working positively here at Blue Coat. This is just one way in which so many of you are praised on a daily basis. I know that your teachers are supportive and encouraging you in many ways, and of course this is of great benefit.

Whilst I know that stickers are highly effective means of giving praise in primary schools, I have also found them to be highly effective in the Sixth Form. Seriously, in my teaching I’ve found that even the older students still enjoy a good sticker.

I learnt this week that one teacher in this school has a stamp with their ‘surprised face’ on it – this teacher claims that the pupils love the first time they receive this stamp on a test or homework that is particularly good. What a great idea!

Praise comes in many forms, and some pupils this year are earning so many plus points that we have had to create an award beyond a Gold Award – that’s right, we are going Platinum. (And yes, that was just a reference to my fellow Detroit native, Kid Rock, we’re ‘going platinum’.) This year, for the first time, I will be giving out Platinum Awards to pupils who achieve 75 points, which is the new next level beyond Gold Awards, which are given for 50 points.

So the question for me remains: if I do headstands for Gold Awards, then what do I do for Platinum? Handstands? A backflip? Well, I’ve got some practising to do.

So pupils, keep working hard and earning praise and positive feedback.  Teachers, please keep giving positive feedback, which the research that I mentioned today suggests is much more impactful than punishment. And I will start practising some new tricks.

Have a great week everyone, enjoy the musical, and have a restful half term.

Holocaust Memorial Day 2020 Line-Up: Spring 2020
Book an open event Apply online Keep exploring
We use cookies to ensure that we give you the best experience on our website. Click on the 'X' to accept our use of cookies, or 'Learn more' for more information. Learn more